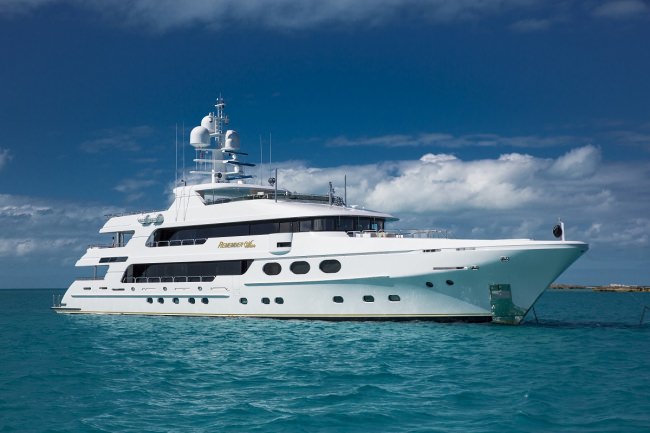 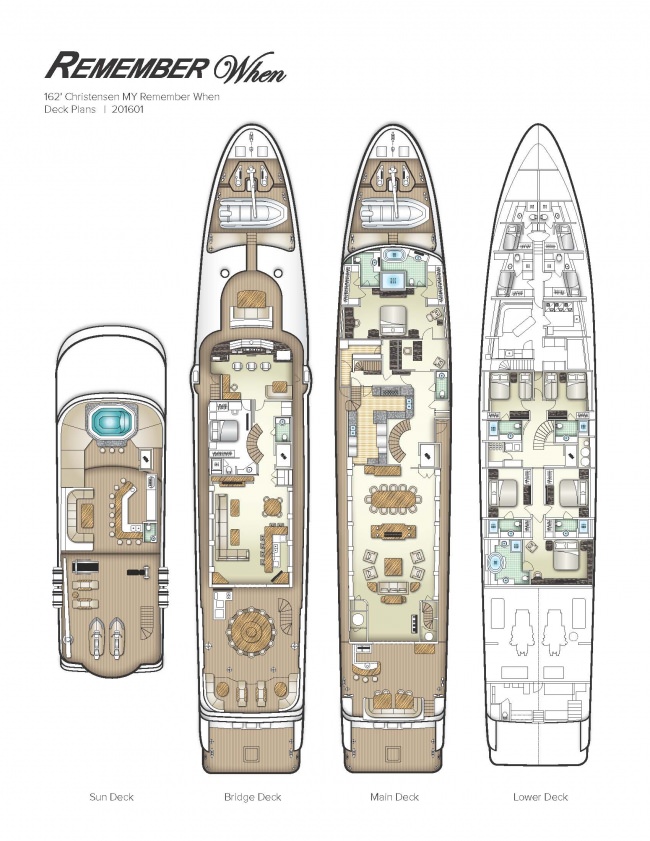 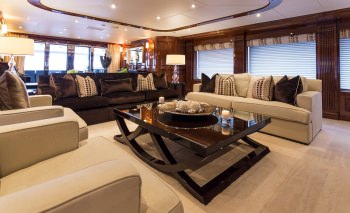 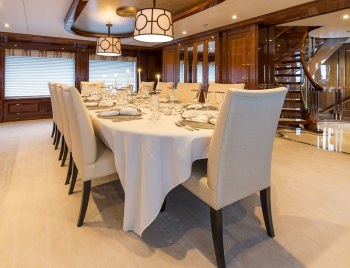 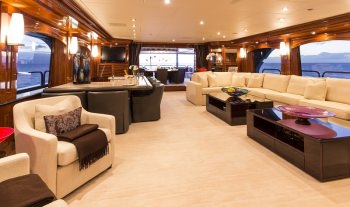 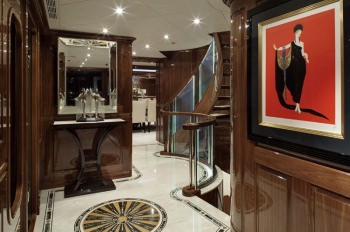 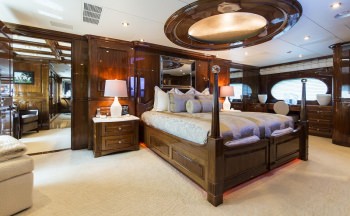 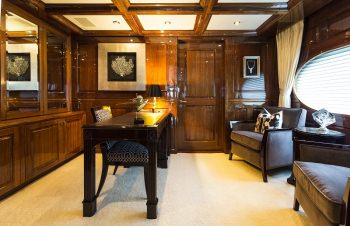 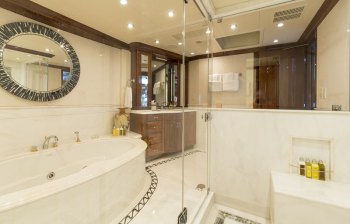 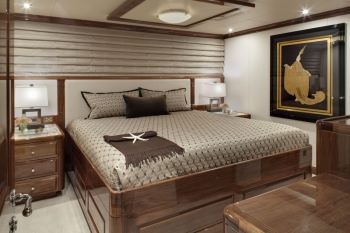 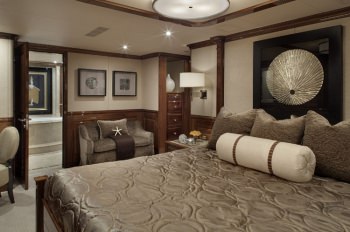 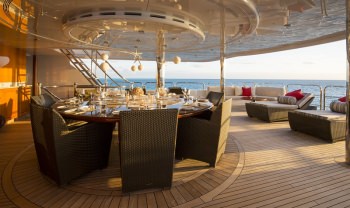 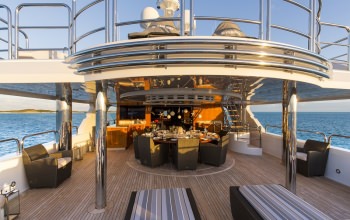 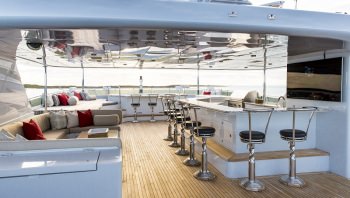 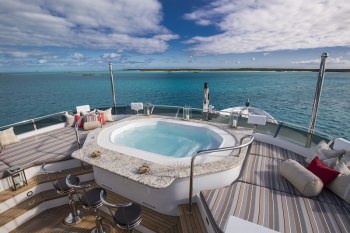 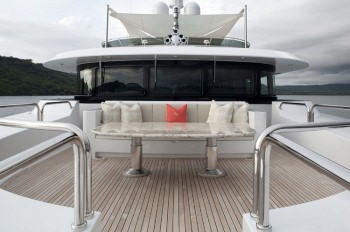 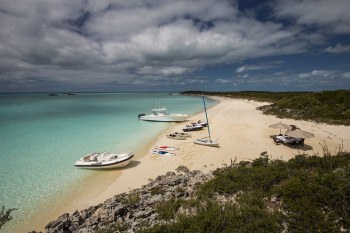 CAPTAIN – Jeffrey Guymon, American
Captain Jeff’s roots are from America’s mid-west, but an interest in SCUBA diving led him early on to the sea. As dive master in Florida’s aquamarine waters, he soon found himself driving boats and naturally progressing his way up to mega-yachts. From Canada to the Caribbean to the Mediterranean, Jeff’s 35 years of experience on busy boats attest to his success afloat. Jeff spent 10 years aboard the M/Y Kanaloa, a very successful charter yacht. As Captain, he is responsible not only for the safe passage of his yacht and the wellbeing of her passengers and crew, but also for maintaining high standards onboard, insuring guests of a five-star holiday.

CHIEF ENGINEER – Diego Barreiro, Spanish
Diego was born and raised in the northwestern port city of Coruna, Spain. After high school, he wanted to follow in his grandfather’s footsteps who worked as a Chief Engineer on commercial fishing boats. He earned his master’s degree in Marine Engineering and began his career as a tender tech and refit engineer. After eight years in the yachting industry, he aspires to always maintain his engine rooms to the highest standard and be able to look back proudly on his work. One place he will never forget is the Philippines, especially Lake Taal, which is located within the island of Luzon, because of it’s beautiful crater lake that sat atop a volcano! His favorite place on earth is still his home in northern Spain for its beauty and people. In his off time, Diego enjoys reading, spearfishing, cycling, swimming, treasure hunting and socializing with others.

CHIEF STEWARDESS - Samantha Klepper, American
Samantha is a native of the Sunshine State, but has called Savannah, Georgia home since 2006. Ten days after graduation with her master's degree in Clinical Social Work she was enticed by her previous owners to join the luxury yachting world and has never looked back! What started as a celebratory summer adventure quickly grew into a passion the likes of which even she could not have anticipated. Samantha's background is in formal fine dining and her years in hospitality have helped instill in her a desire to maintain the highest standards of guest satisfaction at all times. She prides herself on providing each group of guests with a "wow factor" that will keep them talking for years to come. She holds certificates in Maritime Intermediate Interior, Interior Yacht Management, WSET Level II, Crowd & Crisis Management, 200hr Vinyasa Flow Yoga and PADI Certified Free Diver. Her favorite places are Croatia and Ecuador for their breathtaking beauty and super kind people. In her off-time you can find Sam practicing yoga, involved in community outreach and social justice, exploring local sites and cultures, and partaking in experimental vino research...in that order.

HEAD CHEF (rotation)- Russell Draper, Sweden/Australia
Chef Russell hails from Melbourne, Australia. Prior to yachting, Russ was a chef in many "Three Hat" restaurants in Australia and London. He is classically trained and also has apprenticed under many notable chef around the world. He speaks English and Swedish fluently and lives primarily in Sweden with his family. He has been in yachting for 14 years and originally joined the industry because he loves to travel and experience new cultures as well as eat great food! His favorite place he's visited in Barbados. He fell in love with it and really enjoyed the island life. When he hangs up his yachting hat for good, Russ plans to open and organic bakery and micro-farm. In his off time, he enjoys keeping fit, practicing his music and photography, nurturing his spiritual awareness, and surrounding himself with good humans! A little known fact about Russ in that we was a House and Techno DJ for 20 years in both Melbourne and London! An even lesser-known fact-- his grandfather was eaten by a shark off the coast of Australia in 1919!

HEAD CHEF (rotation) - Peter Christensen, Australian
Peter is from the Sunshine Coast of Australia and has worked as a land-based chef for many years prior to yachting. HE owned his own restaurant and won many awards and accolades during that time. He has travelled extensively and worked for such chefs as John Burton Race, Jonathan Wright, and David Feys during which he gained an immense amount of knowledge. His restaurant resumé throughout the world includes Gidleigh Park in Devon, UK, LaTante Claire and Putney Bridge in London, UK. His favorite places he's travelled are Mexico-because of the historic sites and good food, And Dubai-- for its unique and interesting culture. Is his off time he enjoys fishing, surfing and spearfishing. Peter is looking forward to enhancing each and every guests' experience with his world-class cuisine, one bite at a time!

SECOND STEWARDESS - Shanelle Horn-Lucas, Canadian
Nelle is from Toronto, Canada with her parents’ roots tracing back to Jamaica and Scotland. She earned her B.A. degree in Sports Marketing before teaching English for five years in Palma de Mallorca. It was in the beautiful Balearic Islands that she originally discovered yachting. Her friendly personality and love of service was a perfect match for this unique industry. Nelle’s favorite places she’s ever visited are French Polynesia and the Galapagos Islands due to their marine preservation efforts and super friendly people. After yachting she plans to own her own real estate business and continue her volunteer work in underdeveloped countries. In her off times she enjoys beach volleyball, dancing, cooking, visiting vineyards, playing ukulele, jogging and kickboxing. A little-known fact about Nelle is that she was runway model beginning at age 11 in the Eaton’s Catalogue up to age 22 in NY’s Fame Fashion Week!

STEWARDESS - Paige Van Vurren, South African
Paige Van Vuuren hails from Durban, South Africa and visited the US for the first time this January! She has been in the yachting industry for six years and was inspired to join in the hopes of expanding upon her previous hospitality background from back home. She has been in the service industry since the age of 16! Paige’s favorite place she’s ever visited is Cappadocia, Turkey as she said it is the only place that exceeded photo expectations and the people and landscapes were both so incredible. Her long-term goal is to own a boutique bed & breakfast in Sri Lanka one day. In her off time, Paige enjoys surfing, cooking, photography, developing new skills and exploring.

STEWARDESS - Kristi Guymon, American
Kristi is originally from Baton Rouge, Louisiana but has called Augusta and Savannah, GA home for many years. Prior to yachting she was an Electronics Technician in the United States Air Force for four years and sold life and health insurance. She was introduced to yachting by her now husband, Captain Jeff many moons ago. She began dayworking and eventually joined MY Huntress’s program in 2011. She earned a B.A. degree in Sociology from Augusta State University. Her favorite places she visited are Alaska and Italy. In her off time, she enjoys reading, cooking, baking and camping. A little-known fact about Kristi is that she has an adult son named Sam who is also in the yachting industry now.

BOSUN - Christy "CC" Card, South African
Christy grew up in Durban, South Africa. Prior to yachting, she worked at a large accounting firm and was a part-time au pair. Her brother is a yacht engineer and was the one who initially introduced her to the industry five years ago. She is a qualified rescue diver and is three modules away from completing her Officer of the Watch. Her long-term goal is to work her way up to Captain and be a good example for females on deck. Christy’s favorite places she’s visited is Sri Lanka because of the incredible culture of surfing, enjoying life, respecting the environment, and living sustainably. Croatia is a close second because of the untouched beauty and isolated islands to explore as well as super friendly people. Christy prides herself on giving the guests the best experience possible while onboard! In her off time, she enjoys wakeboarding, jet surfing, surfing, golfing, playing guitar and being outdoors. A little-known fact about Christy is that she swam competitively for S.A. and played provincial hockey!

SECOND ENGINEER/DECKHAND - Lara Li Allasia, American
Lara Li Allasia was born in New York City to a Chinese mother and Italian father. She has called many beautiful places home such as England, Italy, Mexico, Greece, and Germany! She is fluent in Italian and Spanish and conversational in French. She had a varied background prior to yachting but the most notable job of late was opening a successful dive shop in Mexico that received Trip Advisor’s “Certificate of Excellence” two years in a row! She earned a B.A. degree from the University of Leeds UK in International Communication/Minor in Asian Pacific Studies. Lara also holds her BAWLA Certified Trainer, AEC 1 & 2, and Medical Person in Charge. Her long-term goal is to continue in the Engineering Department and learn as much as she can! In her off time, she enjoys photography, paddleboarding, Latin series on Netflix, reading, eating, baking, cooking, snorkeling, hiking, travel and adventure!

DECKHAND - Logan Clarke, South African
Logan is from Botswana, South Africa and is fluent in Afrikaans and English. Prior to yachting he was a professional mountain biker, surfer, and lifeguard! He has always dreamed of working on a boat and was able to make his dream a reality just two years ago. He hit the jackpot with his first job being on a very busy, dual-season 55M charter boat! He learned so much while he was with that program and is looking forward to creating many adventurous memories with the guests of MY Remember When! His long-term goal is to be successful with a wife and kids and to have a happy family! His favorite places he’s traveled are San Diego and the west coast of Mexico because the waves were so perfect. In his off time, Logan enjoys fishing, surfing, motorbikes, diving, cycling and video gaming.