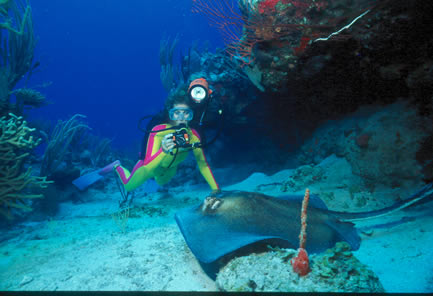 This is a friendly mini-wall on the north shore of Norman that parallels the shoreline and drops steeply from 20 feet on the top to a fine sand bottom at 60 feet. It is named after Spy Glass Hill on Norman Island where pirates once kept lookout for laden merchant ships. The wall is festooned with large sea fans and beautiful purple tube sponges. Many little fishes, such as damselfishes, wrasses, and tobaccofish can be found along the bottom of the wall and tucked into little holes in the reef. Don't forget to look out into the blue water on your left where you might catch a glimpse of an eagle ray, turtle, tarpon, spadefishes or at least a stingray foraging in the soft bottom. Returning to the mooring along the top of the wall where there is good snorkeling, you're likely to see schools of blue tang converging on the bottom to graze on algae, as well as squid in mid-water and houndfish near the surface. In the shallows are colossal coral heads capped by magnificent sea fans.