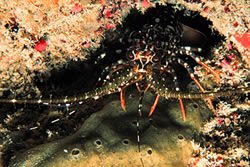 Carrot Shoal, off the southwest tip of Peter Island, is another open water site with all the adventure, superior visibility and big fish encounters this promises. Carrot Shoal is shaped like a railroad train parked on an underwater platform. The platform rises abruptly from a 60 to 70-foot bottom and levels off at 40 feet; then the shoal itself rises straight up to scratch at the surface. It's quite narrow and extends for several hundred feet. It is cut through in several places, which gives it the appearance of separate railway cars. Spend the time to fully investigate the abundance of creatures living under the ledge on the edge of the platform: large green moray eels, tiny fairy basslets and reclusive lobsters. Toward the far end of the formation a large overhang rears up. Beneath it look for the uncommon longsnout butterflyfish, as well as colorful Spanish and spotted lobsters. Past the end of the "train" there is a lovely low archway worthy of the side trip.