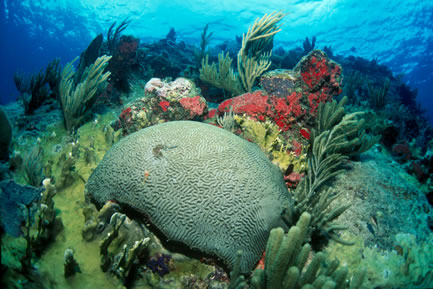 One of the more unusual dives in the BVI is a cavern called Grand Central which is only suitable for advanced divers who are happy with being in a long cavern with only three exits.

Originally discovered by Duncan Muirhead, this dive enters a broad tunnel at about 55 feet. From that point, the tunnel opens out and climbs, turns and descends again as it cuts through a point of the island. The tunnel passes completely through a narrow point of the island. One amazing feature is a shaft that starts at 75 feet and finishes at 15 feet with light streaming down it and all kinds of color on the walls. The inner cavern is sometimes home to a 400 pound grouper. After that there is a long sloping and widening tunnel to the surface which is a swimming pool surrounded by cliffs and huge boulders with no obvious way out... but there is! There is a small, hidden "neck of the bottle" at 15 feet with just enough room for a diver. One exits and does a swimming hang stop around the point back to the boat and this is the time to watch for pelagics including sharks as we have recorded seven different species here. Take you time in the cavern as there is so much life, including turtles, nurse sharks, deer cowries, lobsters, octopi, eels, decorator crabs, copper sweepers and silversides.