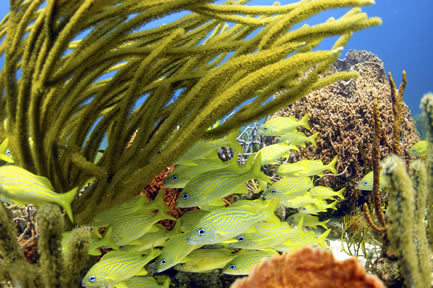 Vanishing Rocks is a very healthy shallow reef due to the currents that sweep through the passage between Cooper and Salt Islands. These currents, which when strong can make the site undivable, nurture its many species of corals and support a large population of reef fishes. The underwater ridge extends off to either side of the breaking pinnacle and is surrounded by lesser formations pockmarked with overhangs, ledges and undercuts. Descending from the boat will place you on a slope covered with gorgonians and small barrel sponges. Closer to the pinnacle there is a sandy area, surrounded by rocks and ledges. This is a great place to lie down on your belly, get your face in close and leisurely observe the inhabitants such as anemones and shrimp, jawfishes, and blennies. Thick delicate coral growth, lobsters, and occasional sleeping nurse sharks can be found here. Along the deeper water a little further out and you'll reach Sergeant Major City, a large multispired formation of pillar coral that is positively overflowing with fish life. Sergeant majors of course, but also squirrelfishes, grunts and bigeye snappers reside here. A little further along is an outlying pillar coral formation called, you guessed it, Sergeant Major Suburbs. Hugging the edge of the rock will bring you to a series of overhangs where a large green moray eel is often spotted.

ONBOARD diving from a charter yacht is by far the best choice if you are planning a scuba diving trip in the Virgin Islands: Your Captain will help you choose the perfect dive site - you sail up to the site - hook up to a mooring ball - dive in some of the world's best diving waters, and when you're done you climb back aboard your yacht to be met by the chef with a most welcome snack. No need to wait for a commercial dive operator - then getting on a stinky diesel dive boat with strangers and taking time to get to and from the dive site - using up half the day. Nothing beats a USVI or BVI catamaran yacht charter for ease and convenience when Scuba Diving in the Virgin Islands. An awesome liveaboard scuba diving experience you will never forget!
Website content, text, & images Copyright © 2023 Virgin Islands Charter Yachts and its partners. Reproduction in whole or in part is prohibited without written approval. Virgin Islands Charter Yachts is an American Veteran Woman owned and operated company.