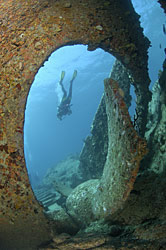 The Royal Mail Steam ship was commissioned for the Royal Mail Packet Company in 1865 to carry mail and passengers from England to the Caribbean. More than 300 passenger cabins were included within her 310 foot length. Its design was unique, for it had both sail and steam power with one of the first steam-driven cast propellors. Captain Woolley, the Captain on the day, decided to anchor in Peter Island's Great Harbor due to an outbreak of yellow fever in St. Thomas.

On the morning of October 29th, 1867 he awoke to barometers falling fast and dark black clouds over Tortola. As it was October and hurricane season was thought to be over, he assumed it was just an early winter storm. Captain Woolley told the crew to fire up the boilers just in case and when the storm hit he needed full ahead even at anchor to hold position. The fearful roar of the hurricane blew howling winds from the North Northwest. A lull came - or as we know it today "the eye of the hurricane". Captain Wolley tried to make a break for open water away from the rocks and land. He headed out between Peter and Salt Islands. Most people onboard couldn't swim so crew were ordered to tie in all the passengers (sealing their fate). The second part of the hurricane hit with black skies and huge seas. Captain Wolley like all good English Captains had a cup of tea with a dash of rum, stirring it with his silver spoon as he navigated his ship through the channel past Salt Island. The rain was blinding so he tried to get a better look outside when a big wave washed him overboard off the bridge. He was never to be seen again.

Rhone was slowly pushed toward the rocks and finally hit Black Rock Point. The cold water hit the hot boiler causing a big explosion splitting the Rhone in half. The stern sank in 35' while the bow drifted slightly deeper into 80'. The vessel now rests in two main sections off Salt Island, near Black Rock.

Today the Rhone is considered to be one of the world's best wreck dives.

At least two dives are needed to cover both the bow and the stern sections of the Rhone, but you'll want to do more. The entire bow section, including the sharp prow, mast and lifeboat davits, can be seen from the surface. At 80' the deeper bow section is dived first. As you descend down toward the ghostly image you'll be greeted by huge schools of Sennets and a large barracuda. Still mostly intact the cavernous interior can be entered from several points near the forward mast. Inside, the hull is coated with Orange Cup Corals and school of grunts, accompanied at times by a variety of jacks and the resident Barracuda fondly known as "Fang". Scenes from the movie "The Deep" were filmed here.

The second dive of the day is on the shallower middle and stern sections. The stern section is more broken up, but the structure of the ship can be easily traced by following the drive train from the massive shallow propeller. Scattered across the bottom are boilers, deck supports and other pieces, many holding fascinating relics of the ship such as tools or silverware, including the silver spoon Captain Wolley used to stir his tea. The holds are lined with Orange Cup Corals and filled with schools of snappers and jacks. Nearly every solid surface of the wreck is covered with a kaleidoscope of corals and sponges.

At night the cup corals and sponges turn the main compartment into a kaleidoscope of orange and yellow.