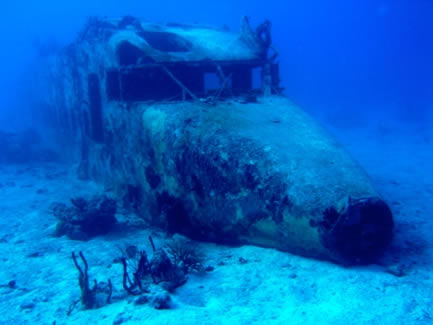 DEPTH: 20-50 FEET (6-15 M) LEVEL: NOVICE
Coral Gardens is a nice quiet dive site tucked into the eastern tip of the south side of Great Dog. As the name suggests, Coral Gardens boasts large beautiful coral formations. These consist primarily of mounds of boulder star coral and great star coral, well embellished with brain corals, tube sponges, sea fans and gorgonians. Under the overhangs look for lobsters, spotted drums and assorted grunts and snappers. Out on the sand stingrays, schools of sennet, occasional turtles and blacktip sharks, as well as the very unusual flying gurnard have been seen. Otherwise, count on goatfish, lizardfishes and sand filefish A recent addition to the dive site is the remains of Atlantic Air BVI's Shorts 360 airplane. In 1993, after making an abortive take off, their one and only aircraft landed in the water about 200 feet off the end of the runway. No one was hurt, but after the airplane was refloated from 30 feet of water it languished hidden in a hangar for many months before being used as a movie prop in a BBC film. It eventually found its way out to Great Dog where it was sunk as part of the BVI's continual artificial reef program. The plane, without wings or tail, sits in the sand patch in about 40 feet of water.